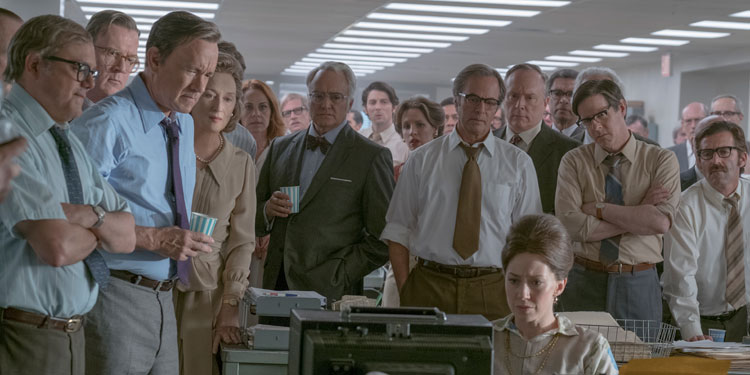 Steven Spielberg may be about to turn 71, but he’s showing no signs of slowing down. Indeed, the current political situation (i.e. Trump), caused him to slot in an extra movie that will be out soon, even though he was already busy making the big budget sci-fi movie, Ready Player One.

That extra film is The Post, but despite the fact it seemed to come together very quickly, Spielberg still managed to pull together an impressive cast, including Tom Hanks, Meryl Streep, Sarah Paulson, Bob Odenkirk, Tracy Letts, Bradley Whitford, Bruce Greenwood, Matthew Rhys and Alison Brie.

Here’s the synopsis: ‘In June 1971 The New York Times, the Washington Post and the nation’s major newspapers took a brave stand for freedom of speech and reported on the Pentagon Papers, the massive cover-up of government secrets that spanned four decades and four US Presidents.

‘At the time, the Post’s Katherine Graham (Streep) was still finding her footing as the country’s first female newspaper publisher, and Ben Bradlee (Hanks), the paper’s volatile, driven editor, was trying to enhance the stature of the struggling, local paper. Together, the two formed an unlikely team, as they were forced to come together and make the bold decision to support The New York Times and fight the Nixon Administration’s unprecedented attempt to restrict the first amendment.’

The Post will be released in UK Cinemas on January 19th, 2018. Take a look at the trailer below. END_OF_DOCUMENT_TOKEN_TO_BE_REPLACED Back in March news emerged not just that Steven Spielberg was working on a film about the Pentagon Papers, but that he’d already got Meryl Streep and Tom Hanks onboard to star. Now the director has been filling out the acting ensemble, as Variety reports that Sarah Paulson, Bob Odenkirk, Matthew Rhys, Bradley Whitford, Carrie Coon, Jesse Plemons, David Cross, Alison Brie, Bruce Greenwood, Tracy Letts, Michael Stuhlbarg, and Zach Woods have all signed onto the movie. There’s no news on the exact roles they’ll play.

The movie will be based on Liz Hannah’s spec script, which recently landed one of the top spots on the Black List of the best unproduced screenplays. It’s ‘a drama about the Washington Post’s role in exposing the Pentagon Papers in 1971, and how the Post’s editor Ben Bradlee and publisher Kay Graham challenged the federal government over their right to publish them.’

The Pentagon Papers were a Top Secret report commissioned to look at what was happening in the Vietnam War. It spoke of a dramatic escalation that was being hidden from the public, and much of its information seemed to support the growing idea that the war was unwinnable. After it was leaked to the Washington Post, the newspaper ended up in a legal battle with the government over whether they could publish more of what they’d learned from the report.

At a time when the current US President is at war with the media and angry about leaks, this look at freedom of the press, the First Amendment and government lies could end up being extremely timely. To ensure the film can properly address current events, the film is on an accelerated production schedule so that it can get an Oscar qualifying run at the end of the year, before getting a wider release in early 2018.