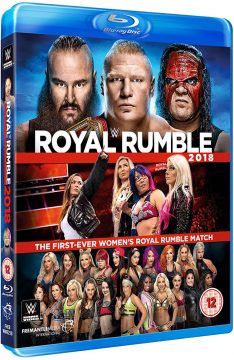 To celebrate the Blu-ray and DVD release of Royal Rumble 2018 (available to buy from 19th March 2018) – we are giving away a Blu-ray to one lucky winner!

Welcome to WWE’s most anticipated match of the year, the 30-competitor over-the-top-rope Royal Rumble! And for the first time ever, there’s both a men’s and women’s Royal Rumble Match, with the winner of each earning a championship shot at WrestleMania. There’s also a three-way battle of behemoths as Universal Champion Brock Lesnar faces Kane and Braun Strowman, and AJ Styles defends the WWE Championship against both Kevin Owens and Sami Zayn in a two-on-one Handicap Match. Plus, much more!

It’s not just a night for making history – it’s a night for incredible, jaw-dropping action too!

AJ Styles battles the odds against the “Yep Movement” of KO and Sami Zayn as only AJ Styles can – with a PHENOMENAL performance! Meanwhile, it’s Beast vs Demon vs Monster as Lesnar, Kane, and Strowman clash for the Universal Championship – a match that is pure carnage from start to finish, with tables, chairs, and bodies broken along the way!

Meanwhile, the men’s Royal Rumble lives up to its reputation as the year’s most anticipated match-up, delivering surprises and huge showdowns. It’s dramatic, nerve-shredding stuff as the few final competitors battle for a shot at WrestleMania glory!

And the women’s Royal Rumble – the first match of its kind in WWE history – is every bit as sensational. Female superstars from different generations come together to change the course of WWE, proving that the WWE Women’s Evolution has stepped up to enter its next groundbreaking phase!

And if that’s not enough, the show ends with a shock debut from one of the most exciting female athletes in the world. The WWE women’s division will never be the same again!

For your chance to win Royal Rumble 2018 on Blu-ray, answer the question below and fill in your details, then press submit! The competition closes on March 25th, 2018, so get answering and good luck. END_OF_DOCUMENT_TOKEN_TO_BE_REPLACED 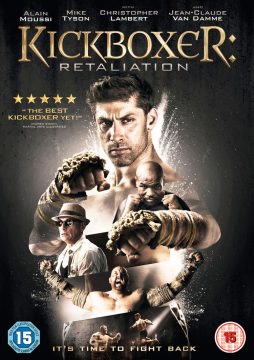 To celebrate the home entertainment release of KICKBOXER: RETALIATION, available now on digital download and on DVD & Blu-ray from 5th March 2018, we have a copy of the DVD, signed by the film’s star ‘Alain Moussi’, up for grabs, courtesy of Kaleidoscope Entertainment!

This follow up to last year’s sensational Kickboxer: Vengeance sees Alain Moussi and Jean-Claude Van Damme teamed up again as Kurt Sloan and mentor Durand – this time, with Sloan facing down one of the screen’s biggest and most brutal villains, in the shape of underground champion Mongkut, played by the incredible Hafþór Júlíus Björnsson, famous as unstoppable ‘The Mountain’ Gregor Clegane in Game of Thrones.

Hollywood stunt performer Alain Moussi, flexing his acting chops as well as his muscles, and original Kickboxer star Van Damme make a great pairing as the hotheaded novice and the wise veteran. The A-grade cast also includes Highlander’s Christopher Lambert, on brilliant form here as the villainous Thomas Moore, forcing Sloan to fight against his wishes; as well as boxing legend and Hangover star Mike Tyson, who is drafted in to get Sloan ready for the mother of all bouts.

With exotic Thailand locations, fiery fight scenes and some stupendous stunt-work, KICKBOXER: RETALIATION is a no-holds barred-slice of slam bang cinema. With a finale that will make your eyes water, this is a blistering blast of mixed martial arts mayhem that hits the viewer right between the eyes.

The film is also available in a brilliantly bone-crunching box set paired up with KICKBOXER: VENGEANCE, which sees Jean-Claude Van Damme training up Alain Moussi for a killer bout against Guardians of the Galaxy and Spectre star Dave Bautista.

For your chance to win Kickboxer: Retaliation on DVD, answer the question below and fill in your details, then press submit! The competition closes on March 18th, 2018, so get answering and good luck. END_OF_DOCUMENT_TOKEN_TO_BE_REPLACED 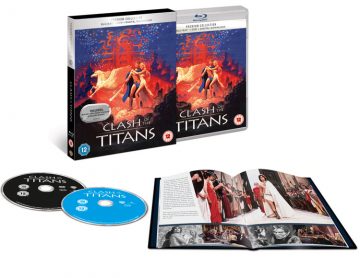 To celebrate the release of CLASH OF THE TITANS – available on Blu-ray, DVD & Digital HD Dual Format from Warner Bros. Home Entertainment 26th Feb. 2018 – we are giving away a copy!

Before history and beyond imagination! The machinations of gods above and the fates of man and monsters here below play out in a Clash of the Titans Decades prior to the sensational 2010 version of the tale, Harry Hamlin took up sword and shield to play valorous Perseus, mortal son of Zeus (Laurence Olivier), who sets out to fulfill his destiny by rescuing beloved Andromeda from the wrath of goddess Thetis (Maggie Smith). Perils await Perseus time and again. And eye-filling thrills await viewers as stop-motion effects legend Ray Harryhausen (Jason and the Argonauts) unleashes snake-haired Medusa, fearsome Kraken, winged Pegasus, two-headed dog Dioskilos, giant scorpions and more. Rejoice, fantasy fans: the movie gods gift us with adventure that’s innovative, heroic, titanic.

The Premium Collection, revered films across all genres celebrated in a Premium package set containing the film on Blu-ray, DVD and a Digital Copy (via the Ultraviolet service) giving fans a must own version that allows them to watch however they choose. Each release also includes a collectible slipcase and 4 collectible artcards featuring the films key art and 3 lobby cards style stills.

For your chance to win Clash Of The Titans on Blu-ray, answer the question below and fill in your details, then press submit! The competition closes on March 10th, 2018, so get answering and good luck. END_OF_DOCUMENT_TOKEN_TO_BE_REPLACED 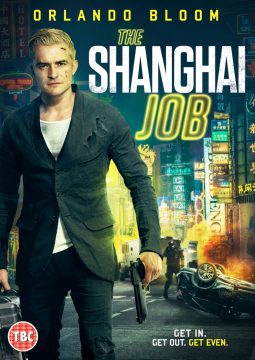 To celebrate the home entertainment release of THE SHANGHAI JOB, available now on digital download and on DVD from 5th February 2018, we have a copy of the DVD up for grabs, courtesy of Signature Entertainment!

“Failure is something I could never live with again – how’s that for assurance?”

Pirates of the Caribbean and Lord of the Rings superstar Orlando Bloom proves himself a knockout action hero in this dazzling Shanghai-set feature debut from Charles Martin (director of Skins and gripping TV crime drama Marcella), from the team behind Mechanic Resurrection, Welcome To The Punch and Iron Man 3.

Bloom lights up the screen as the charismatic and not-to-be-messed-with Danny Stratton – a cross between Matthew Bourne and The Transporter. Entrusted with taking the ultra-valuable Zodiac Vase – ‘the soul of China’ – from Shanghai to London, Stratton’s hi-tech crew are hijacked on their way to the airport in a nerve-shredding chase sequence – by the same gang who hit Stratton a year before and left his career in tatters. Bloom is brilliant as a man with nothing left to lose, who’ll stop at nothing to even the score – right up to a nail-biting, vase-tossing finale.

Superbly filmed in and around the striking, neon-drenched city of Shanghai, with a pulsing soundtrack (including Katy Perry’s song Roulette) and jaw-dropping action set pieces, the film also features Simon Yam and Lynn Xiong and Xing Yu, stars of the action classic Ip Man. This is a sensational mix of twisty heist thriller with high-kicking actioner, as if Ocean’s 11 was crossed with Taken, and, with the commanding central presence of a blond, buff Bloom, THE SHANGHAI JOB is just the ticket for those in search of stylish, breathless entertainment.

For your chance to win The Shanghai Job on DVD, answer the question below and fill in your details, then press submit! The competition closes on February 18th, 2017, so get answering and good luck. END_OF_DOCUMENT_TOKEN_TO_BE_REPLACED 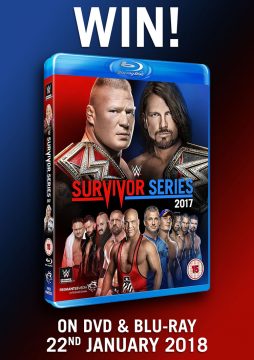 To celebrate the Blu-ray and DVD release of Survivor Series 2017 (available to buy from 22nd January 2018) – we are giving away a Blu-ray to one lucky winner!

In the ultimate battle of brand supremacy as Team Raw goes head-to-head with Team SmackDown Live in a traditional 5-on-5 Survivor Series Match. And in a true dream matchup, WWE Champion AJ Styles stands toe-to-toe with Universal Champion Brock Lesnar for the first time ever! There are more never-before-seen matches too as The Shield takes on The New Day, and Raw Women’s Champion Alexa Bliss takes on SmackDown Women’s Champion Charlotte Flair. Plus much more!

It’s the one night of year when the superstars of Raw and SmackDown go head-to-head – and 2017’s Survivor Series is the most dramatic in the event’s history!

It’s another groundbreaking night for the women’s evolution too, with the first ever showdown between Alexa Bliss and Charlotte Flair – plus a sensational elimination match that proves just how stacked with talent the current women’s division really is!

Meanwhile, the first ever match between The Shield and The New Day lives up to all expectations – a sizzling encounter that many fans thought they’d never see in WWE!

In fact, it’s a show packed with dream match-ups, as the brands collide with champion vs champion matches. There’s electric action from opposing tag champs The Bar and The Usos – and a personal vendetta between Intercontinental Champion The Miz and Baron Corbin!

But the biggest dream match, of course, is the huge battle between AJ Styles vs Brock Lesnar – a match-up that WWE fans have wished to see for years, and one that proved as dramatic and jaw-dropping in the ring as fans imagined!

Don’t miss out on this piece of WWE history!

For your chance to win WWE Survivor Series 2017 on Blu-ray, answer the question below and fill in your details, then press submit! The competition closes on February 5th, 2017, so get answering and good luck. END_OF_DOCUMENT_TOKEN_TO_BE_REPLACED 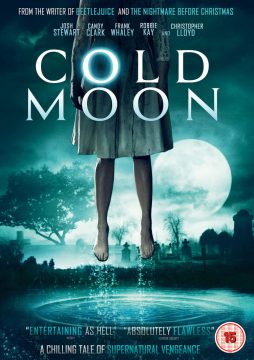 To celebrate the release of COLD MOON – available on DVD & Digital 22nd Jan. 2018 – we are giving away a copy on DVD.

Based on the novel Cold Moon Over Babylon by Michael McDowell, writer of Beetlejuice and The Nightmare Before Christmas, Cold Moon is an eerie tale of murder, manipulation and vengeance from beyond the grave. Featuring a strong central performance from Josh Stewart (The Collector, The Collection) and a terrifying turn by Christopher Lloyd (Back to the Future 1-3, The Addams Family, I Am Not a Serial Killer) this is the perfect film to give you chills on a winter’s night.

For your chance to win Cold Moon on DVD, answer the question below and fill in your details, then press submit! The competition closes on February 4th, 2017, so get answering and good luck. END_OF_DOCUMENT_TOKEN_TO_BE_REPLACED