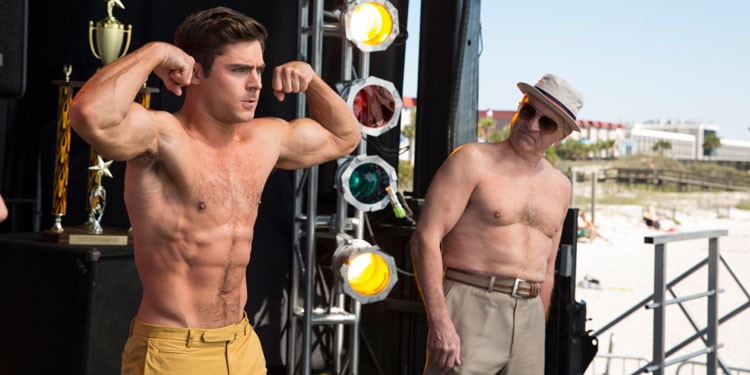 I suppose it’s a bit much to expect a film called Dirty Grandpa to be anything except dirty and about a grandpa. However, despite the fact he’s spent most of the past 20 years phoning it in, it’s difficult not to hold out hope that with Robert De Niro onboard it’s going to be more than just a series of slightly random gross-out jokes and comedy that’s more annoying than funny. Unfortunately, it isn’t.

Jason (Zac Efron) is an uptight lawyer, a week away from marrying an equally uptight woman. It’s also his grandmother’s funeral. He gets roped in to driving his grandfather, Dick (De Niro), to Florida for his annual vacation. However, once on the road, it becomes clear the 72-year-old isn’t intending for a couple of weeks of sun and shuffleboard while reminiscing about his late wife – he wants to get laid and party.

That isn’t what Jason had in mind at all, but soon Dick is dragging him into a series of shenanigans involving accidentally smoking crack, waking up virtually naked on the beach, getting in trouble with the police and having a penis swastika drawn on his forehead. Turns out Dick isn’t just hoping to let loose following the death of his wife and a 15-year drought in his sex life, he’s also worried that Jason isn’t really happy in his buttoned down lawyer life.

Dirty Grandpa wants to be a Judd Apatow-type flick, mixing a load of gross-out humour with a chunk of sentimental emotions. However, it suffers from what many comedies of this ilk do, which is that it often feels more like a series of sketches than a movie. As a lot of those sketches land with a thud or actively work against the emotional arc of the story, there’s a lot more in the movie that doesn’t work than does.

To be fair, some sections are quite fun and when it’s actually telling a story rather than just heaping randomness upon randomness, it suggests it could have been a lot better than it is. De Niro is also often pretty fun as the filthy septuagenarian, although the fact the film gets him to do the same shtick over and over again does mean it starts to outstay its welcome.

There are also far too many things that don’t actually make any sense, where you have to actively beat your brain into submission in order not to feel that the writers and directors think the viewer is a complete moron. Either that, or you can get arrested in Florida for being a paedophile and then everyone completely forgets about it the moment you post bail.

Of course, for those who like a bit of man flesh, there’s Zac Efron and quite a few other buff guys with their shirts off. Efron certainly spends plenty of time allowing us to see quite how much time he’s spent in the gym, by wearing very little, showing off his booty and generally acting in a way that if he was a woman we’d probably be screaming about the terrible objectification. However, if you like a bit of Efron eye candy, it certainly helps liven up what is otherwise often a very annoying and only intermittently entertaining movie. Indeed, it’s just about the best thing about the movie.

Overall Verdict: Dirty Grandpa feels like a bit of a missed opportunity. Efron & De Niro give it their all and the movie keeps hinting at being something a lot better than it actually is. However, if the only thing you want is a grandpa being dirty, it does certainly manage that.

The Blu-ray includes an Extended Cut of the film, but it can’t be said that it helps at all. 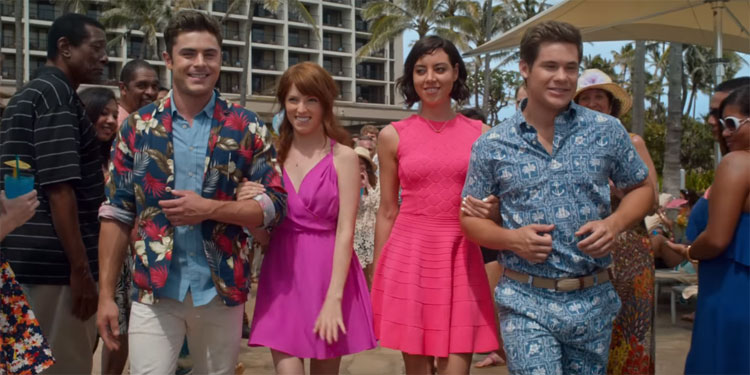 I didn’t think it was possible, but they’ve managed to make a trailer for a Zac Efron movie where he doesn’t take his shirt off at all! Instead it focuses on the comedy and the fact that along with Zac are the comedic talents of Adam Devine, Aubrey Plaza and Anna Kendrick.

A new Red Band trailer has arrived, which ladles on the rudenes, so take a look at it below.

Here’s the synopsis: ‘Hard-partying brothers Mike (Adam Devine) and Dave (Zac Efron) place an online ad to find the perfect dates (Anna Kendrick, Aubrey Plaza) for their sister’s Hawaiian wedding. Hoping for a wild getaway, the boys instead find themselves outsmarted and out-partied by the uncontrollable duo.’

The comedy will be in UK cinemas on August 10th. END_OF_DOCUMENT_TOKEN_TO_BE_REPLACED 2016 appears to be the year of Zac Efron comedies that don’t look all that good, but which hope to lure people in on the promise that he’s been in gym a lot of working out hard and will show us the results. We’ve already had Dirty Grandpa, and this summer will bring both Bad Neighbours 2 and Mike & Dave Need Wedding Dates. The last of those now has a trailer.

And as expected, despite the presence of Efron, Adam Devine and the excellent Aubrey Plaza and Anna Kendrick, it looks a bit naff. But even the poster shows there will be Efron nipples!

Here’s the synopsis: ‘Hard-partying brothers Mike (Adam Devine) and Dave (Zac Efron) place an online ad to find the perfect dates (Anna Kendrick, Aubrey Plaza) for their sister’s Hawaiian wedding. Hoping for a wild getaway, the boys instead find themselves outsmarted and out-partied by the uncontrollable duo.’

The movie will be in cinemas in August. END_OF_DOCUMENT_TOKEN_TO_BE_REPLACED 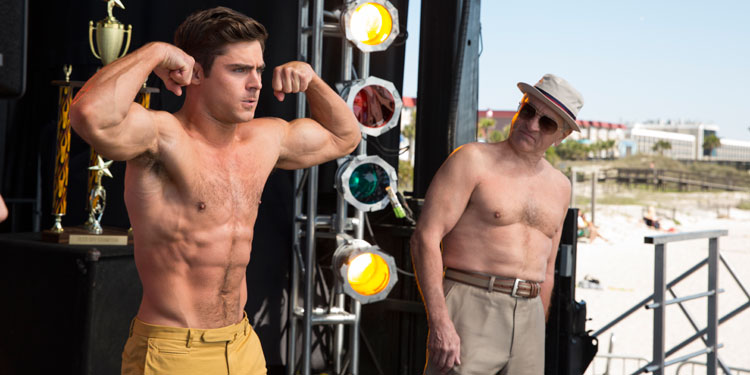 This film won’t be for everyone’s tastes and ultimately made me question what Robert De Niro is doing with his career. I reviewed this film with the mind-set that it would be another standard American college sex comedy, and as such I was in full American Pie (1999) mode as I watched it. More so expecting a hormonal comedy full of crude jokes, but not involving a personal interaction with a fruit-based dessert.

Dirty Grandpa tells the ‘wholesome’ story of Dick Kelly (De Niro), a recent widower who tricks his grandson, Jason Kelly (Zac Efron), into driving him down to Daytona beach for spring break, so that they can spend some quality family time together and so that Dick can get his end away.

To flesh it out a bit more Jason is uptight, works for a law firm and is about to get married to the wrong woman. As such Dick wants to liberate his oppressed grandson, reinvigorate Jason’s lost free spirit and forgotten desire to be a photographer, but the story doesn’t really matter in a film like this as it is just an excuse to set up lots of bland set pieces and poor jokes. END_OF_DOCUMENT_TOKEN_TO_BE_REPLACED 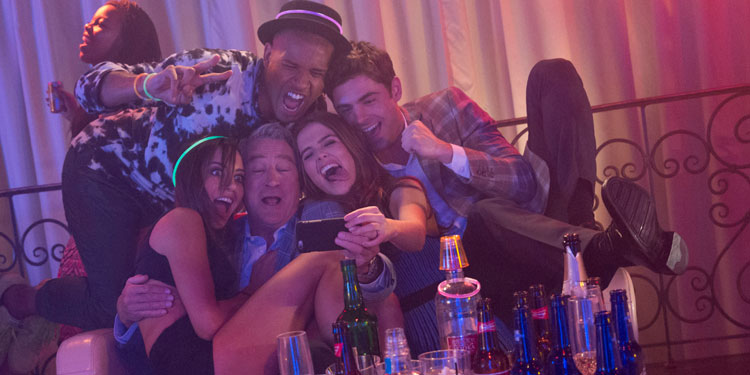 A couple of weeks ago we had a trailer for Dirty Grandpa, but now the red band version is here to let us know that Robert De Niro is going to swear a lot in the finished movie, and that Zac Efron’s CGI undies from the first promo won’t be around in the final article.

Here’s the synopsis: ‘Jason Kelly [Zac Efron] is one week away from marrying his boss’s uber-controlling daughter, putting him on the fast track for a partnership at the law firm. However, when the straight-laced Jason is tricked into driving his foul-mouthed grandfather, Dick [Robert De Niro], to Daytona for spring break, his pending nuptials are suddenly in jeopardy.

‘Between riotous frat parties, bar fights, and an epic night of karaoke, Dick is on a quest to live his life to the fullest and bring Jason along for the ride. Ultimately, on the wildest journey of their lives, “dirty” Grandpa and his uptight grandson discover they can learn from one another and form the bond they never had.’

The movie will be in UK cinemas on January 22nd. END_OF_DOCUMENT_TOKEN_TO_BE_REPLACED