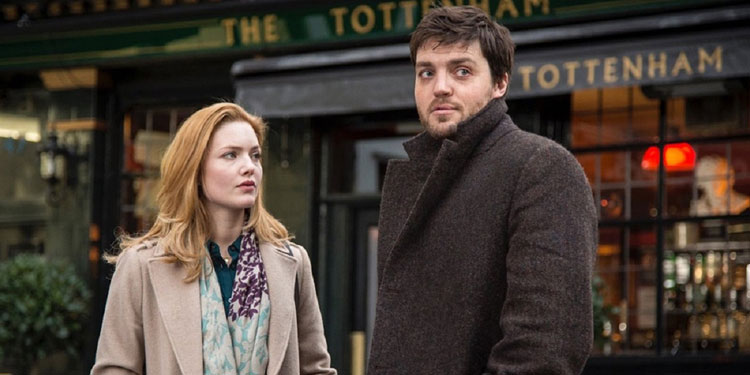 Apparently, the BBC enquired about the rights to Robert Galbraith’s novel, The Cuckoo’s Calling, before it was revealed that Galbraith was actually a pseudonym of JK Rowling. However, it’s likely their plans for a TV version changed once they realised the interest that would be generated by the connection to the Harry Potter author.

This year we got five episodes of ‘Strike’, the first three of which adapted The Cuckoo’s Calling, and the other two The Silkworm. This DVD just contains the former, introducing us to private eye Cormoran Strike (Tom Burke) – an injured war veteran (he lost part of his leg in Afghanistan), who’s swimming in debt and sleeping in his office.

He’s hired to look into the death of model Lula Landry. Although officially classified a suicide, her brother thinks it was murder. At the same time Cormoran also picks up a Girl Friday in the form of temp secretary, Robin (Holliday Grainger), who turns out to be more useful than the gumshoe expected.

As Strike looks further into the case, things get increasingly dangerous.

Things would probably have been better for The Cuckoo’s Calling if the aura of Rowling didn’t hang over it. Rather like mini-series adaptation of her previous book, The Casual Vacancy, it brings a weight of expectation that it would be difficult to live up to. With Strike, we have a decent new TV detective, but it feels a bit disappointing as it’s nothing we haven’t seen many times before. Indeed, the character of Strike is pretty much a pulp novel cliché transplanted into the body of a 21st Century man. Thankfully he’s given charming life by the talented and genial Tom Burke. Holliday Grainger also gives it her all as his sidekick, but to be honest she’s not given a vast amount to do.

I also wonder whether if it wasn’t for the aura of Rowling, The Cuckoo’s Calling would have been given a shorter, sharper adaptation. Spreading it out over three episodes stretches the plot out quite thinly, particularly because it’s not the most enthralling, intricate mystery the world has ever seen. Two episodes would have been more than enough to do it justice, as without the Rowling/Galbraith prose to keep you hooked, the plot itself isn’t all that different to many other mysteries and has to be stretched out over three hours.

I know I’m sounding pretty negative, which I don’t mean to. It’s just that with the talent on display here, not least from the actors, this could have been more than it is. Even stretched out over three hours it’s entertaining and keeps you pulled in, but with more thought and intensity it could have brought out both the humour and the dark edges far more than it does.

What it undoubtedly does is work as a decent pilot for what could become a really good detective series. There’s enough here to make the viewer want to see more, even if they may wish The Cuckoo’s Calling itself was at least equal to the sum of its parts.

Overall Verdict: Perhaps a little too in thrall to its superstar author, but The Cuckoo’s Calling is a watchable first TV adventure for private eye Cormoran Strike.