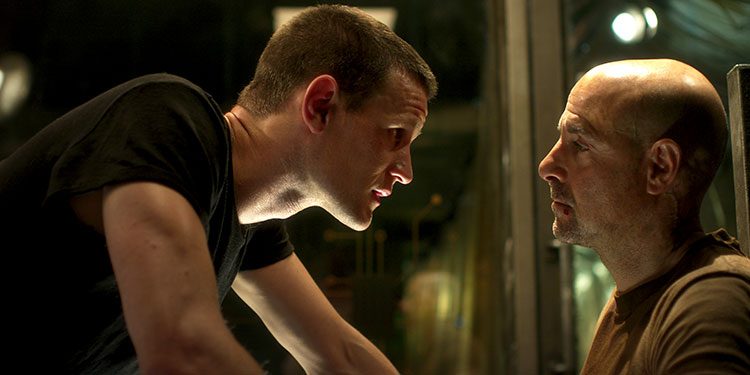 Synopsis: ‘In this new pandemic thriller, humanity is battling intelligent, adrenaline-fueled creatures born from a viral super-strain. After being bitten, human survivor Morgan (Matt Smith) realizes he is asymptomatic and can communicate with the infected, leading the last survivors on a hunt for Patient Zero and a cure.’

Things change when they come across Stanley Tucci’s cool, calm, collected and conversational zombie, who has a few ideas about who’s diseased and who isn’t.

Take a look at the trailer for the movie below. In the US Patient Zero hits VoD on August 14th, and gets a limited cinema release on September 14th. No UK date is currently set. END_OF_DOCUMENT_TOKEN_TO_BE_REPLACED

For many, All the President’s Men is the ultimate 70s paranoia movie, the film which inspired a generation of investigative journalists. Now, all these years later, comes a film which in every way is its equal. Spotlight is angry, unbearably tense, brilliantly written and performed, and of course based on a real life scandal, arguably one of the biggest scandals to hit America since the 1970s.

The newsroom in question is the Boston Globe, specifically its special investigations section called Spotlight. Its leader is Michael Keaton, who immediately comes under pressure to deliver a story by new editor Live Schreiber, a peculiar, possibly autistic man but one who is thorough in his job and sees potential in a story about a child abuse case. Keaton agrees to pursue the story with his crack team, including the driven Mark Ruffalo and the sensitive Rachel McAdams. They slowly reveal several cases of abuse of children in the 1970s by Catholic priests, and try to get the victims, now very fragile adults, to reveal their stories. END_OF_DOCUMENT_TOKEN_TO_BE_REPLACED