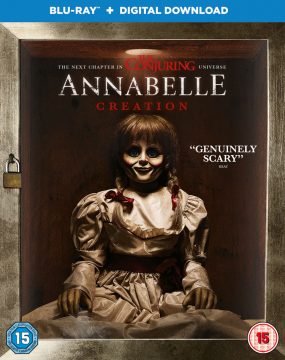 Your favourite creepy doll is back when “Annabelle: Creation” arrives on Blu-ray™, DVD and Digital Download 4th December 2017.

In “Annabelle: Creation”, several years after the tragic death of their young daughter, a doll maker and his wife welcome a nun and several girls from a shut-down orphanage into their home. They soon become the target of the doll maker’s possessed creation, Annabelle.

For your chance to win Annabelle: Creation on Blu-ray, answer the question below and fill in your details, then press submit! The competition closes on December 10th, 2017, so get answering and good luck. END_OF_DOCUMENT_TOKEN_TO_BE_REPLACED 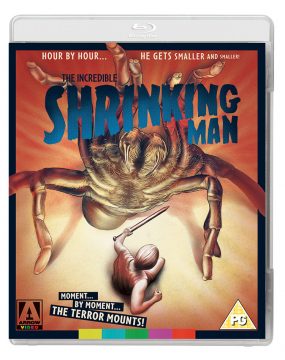 To celebrate the Blu-ray release of THE INCREDIBLE SHRINKING MAN, available on Blu-ray from 13th November, we have a copy of the film on Blu-ray up for grabs, courtesy of Arrow Video!

Based on the novel by the massively influential sci-fi and horror writer Richard Matheson (I Am Legend, The Martian Chronicles), with a script adapted by Matheson himself, and directed by Fifties sci-fi king Jack Arnold (Creature From The Black Lagoon), this is rightly regarded as being one of the finest science-fiction films of all time, a critically-acclaimed smash hit that currently has a 90 per cent score on Rotten Tomatoes.

Genuinely thrilling, and, as Scott’s plight becomes more desperate, tense and gruelling, the film features superbly realised special effects that bely the era, and the setting Scott finds himself in – filled with oversized household objects that suddenly become threatening and dangerous – takes on a wonderfully surreal atmosphere.

This beautiful UK Blu-ray debut features a documentary on Jack Arnold, the pioneer behind Creature From The Black Lagoon and It Came From Outer Space; new sleeve artwork and a collector’s booklet; as well as, for old school enthusiasts, a Super 8 presentation of the film – the incredible shrinking reel, if you like.

For your chance to win The Incredible Shrinking Man on Blu-ray, answer the question below and fill in your details, then press submit! The competition closes on November 26th, 2017, so get answering and good luck. END_OF_DOCUMENT_TOKEN_TO_BE_REPLACED 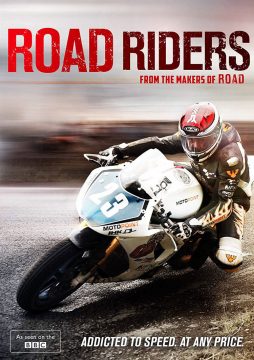 To celebrate the release of Road Riders – out on Digital and DVD 6th November – we are giving away a DVD courtesy of Kaleidoscope Home Entertainment.

A full throttle documentary series the likes of which you’ve never seen before, Road Riders shows the passion and perseverance of the bike riders who stare down danger every time they strap on a helmet and head on the twisty, treacherous, Northern Irish B-roads on their bikes.

Among those featured in the documentary are fearless country girl, Yvonne Montgomery, who got a motorbike license for ‘a bit of independence’, and a year later found herself competing in road races; young hotshot racer Gareth Keys, who says about road racing ‘nothing less will do’ and hasn’t let serious injuries sustained during a recent race put him off; and glamorous racing star Veronika Hankocyova, who says “you live more in five minutes on a bike like this going flat out, than some people live in a lifetime”. These are people for whom road racing is ‘a big family’ and isn’t just a pastime, but a way of life.

Out now on DVD and Digital 6th November.

For your chance to win Road Riders on DVD, answer the question below and fill in your details, then press submit! The competition closes on November 19th, 2017, so get answering and good luck. END_OF_DOCUMENT_TOKEN_TO_BE_REPLACED 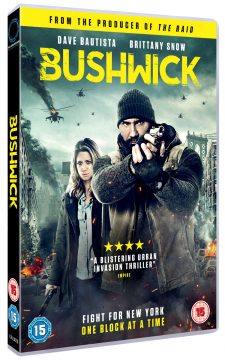 To celebrate the home entertainment release of BUSHWICK, available on DVD and Blu-ray 23rd October, we have a copy of the film on DVD up for grabs, courtesy of Kaleidoscope Entertainment!

It’s Guardians of the Galaxy star Dave Bautista versus an entire Texas battalion in New York City in this all-out action thriller from the makers of Cooties and Stake Land.

Action movie stars don’t come much bigger than Dave Bautista, Drax from the smash hit Guardians of the Galaxy series, and the villainous Hinx from the latest James Bond film Spectre. Here, front and centre as Stupe, a take no prisoners ex-Marine on the warpath against a Texas militia invading New York, BUSHWICK establishes Bautista – soon to be seen in Blade Runner 2049 – as an action hero on a par with Vin Diesel and The Rock.

Brittany Snow, from the Pitch Perfect movies, excels as Lucy, who, out of sheer necessity when her neighbourhood is suddenly transformed into a dangerous war zone, transforms into a fierce fighting machine alongside Stupe.

Brilliantly directed by Cary Murnion and Jonathan Milott, the team behind the cult horror hit Cooties, here deploying some superbly realised action set pieces and imbuing proceedings with a paranoid, anarchic feel; and expertly scripted by Nick Damici – the red-hot writer of the similarly themed apocalyptic thrillers Stake Land 1 and 2,Texas noir classic Cold In July, and hit series Hap and Leonard – the film is, terrifyingly, inspired by real events.

BUSHWICK is a timely, chilling look at the landscape of America right now, as well as a full-bore urban actioner that mixes elements of The Warriors and Escape From New York. It hits the ground running with an extraordinary opening sequence, and doesn’t let up until the end credits roll.

Synopsis: Lucy (Brittany Snow) emerges from a Brooklyn subway to find that her neighbourhood is under attack by black-clad military soldiers. She crosses paths with an ex-Marine corpsman, Stupe (Dave Bautista), who reluctantly helps her fight for survival through a civil war, as Texas attempts to secede from the United States of America.

For your chance to win Bushwick on DVD, answer the question below and fill in your details, then press submit! The competition closes on November 5th, 2017, so get answering and good luck. END_OF_DOCUMENT_TOKEN_TO_BE_REPLACED 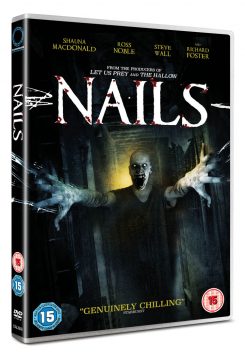 To celebrate the release of NAILS, out now on Digital Download and available on DVD 16th October, we have a DVD available to giveaway courtesy of Kaleidoscope Home Entertainment.

A nerve-stretching horror thriller from the executive producer of ‘Assault on Precinct 13’ and producers of ‘Let Us Prey’ and ‘The Hallow’, that sees your worst nightmare brought to terrifying life in the form of new horror icon ‘Nails’, starring genre favourite Shauna Macdonald (The Descent 1 & 2) and Stitches star Ross Noble.

Blending elements of Paranormal Activity, and the hospital-set Halloween 2, with a ghoulish creature that wouldn’t look out of place in The Descent (the horror classic starring Macdonald) debut director Dennis Bartok delivers an ingenious, throat-grabbing chiller that provides so many jolts it should come with a general anaesthetic.

For your chance to win Nails on DVD, answer the question below and fill in your details, then press submit! The competition closes on November 4th, 2017, so get answering and good luck. END_OF_DOCUMENT_TOKEN_TO_BE_REPLACED 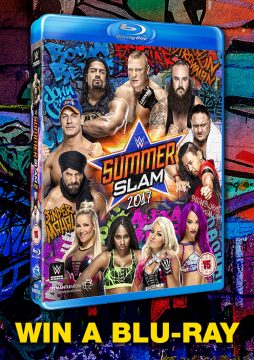 To celebrate the release of WWE: SummerSlam 2017 on DVD and Blu-ray we are giving away a copy on Blu-ray!

WWE’s second biggest show of the year and the biggest party of the summer…. It’s SummerSlam! Coming from the Barclays Center, the main event shakes the foundations of Brooklyn when Brock Lesnar defends the Universal Championship against Roman Reigns, Braun Strowman and Samoa Joe in a Fatal 4-Way Match. And “The King of Strong Style” Shinsuke Nakamura gets his first chance at WWE gold when he faces “The Modern-Day Maharaja” Jinder Mahal for the WWE Championship. Plus much more!

Second only to WrestleMania, SummerSlam is one of the most exciting and hotly anticipated events in the WWE calendar – and this year’s edition was earth shattering!

The Universal Championship Fatal 4-Way is simply electric, with four of WWE’s most powerful Superstars demolishing each other for a chance to hold Raw’s number one title. Particularly impressive is Braun Strowman’s man-handling of “The Beast” Brock Lesnar – a moment that turns the “Monster Amongst Men” into an unlikely anti-hero!

But it’s far from a one-match show, as there’s incredible action from top to bottom!

Sasha Banks proves she really is The Boss as she tries to win her fourth Raw Women’s Championship. Baron Corbin challenges the veteran 16-time champ John Cena in a sizzling match-up. And Shinsuke Nakamura tries to overcome the odds by striking Jinder Mahal and the Singh Brothers wit his patented “strong style”!

There’s also major drama as Shane McMahon referees a heated grudge match between AJ Styles and Kevin Owens over the US Championship. Shane promises to call it down the middle, but anything can happen in WWE…

Also unmissable is the reunion of former Shield brothers Seth Rollins and Dean Ambrose – plus Finn Bálor unleashing the “Demon” on Bray Wyatt!

Be sure to pick up this historic night of action on DVD & Blu-ray!

For your chance to win WWE Summerslam 2017 on Blu-ray, answer the question below and fill in your details, then press submit! The competition closes on October 22nd, 2017, so get answering and good luck. END_OF_DOCUMENT_TOKEN_TO_BE_REPLACED