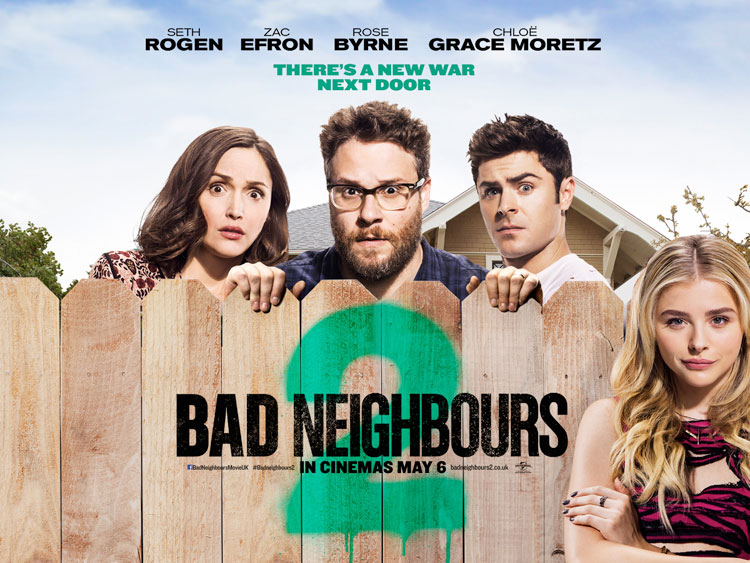 Over the past couple of years, if there’s been Red Band trailer for a Zac Efron movie, you could pretty much guarantee it would feature him in a state of semi-undress at some point. Now we have one for Neighbours 2 which does offer some slow-motion Zac shirtlessness and tiny orange shorts, but it appears that Seth Rogen also wanted to show off his pecs (or lack thereof), as he’s equally topless.

Here’s the synopsis: ‘Now that Mac (Set Rogen) and Kelly Radner (Rose Byrne) have a second baby on the way, they are ready to make the final move into adulthood: the suburbs.  But just as they thought they’d reclaimed the neighborhood and were safe to sell, they learn that the new occupants next door are a sorority even more out of control than Teddy (Zac Efron) and his brothers ever dreamed of being. Tired of their school’s sexist, restrictive system, the unorthodox ladies of Kappa Nu have decided to start a house where they can do whatever the hell they want.

‘When Shelby (Chloe Moretz) and her sisters, Beth (Kiersey Clemons) and Nora (Beanie Feldstein), find the perfect place just off campus, they won’t let the fact that it’s located on a quiet street stand in their way of parties as epic as the guys throw. Forced to turn to the one ex-neighbor with the skills to bring down the new Greeks next door, the Radners—alongside best friends Jimmy (Ike Barinholtz) and Paula (Carla Gallo)—bring in charismatic Teddy as their secret weapon.  If he can infiltrate the sorority and charm his way through it, the thirtysomethings will shutter the Kappas’ home.  But if they think that their neighbors are going down without a fight, they have severely underestimated the power of youthful ingenuity and straight-up crazy.’

It’ll be in cinemas in May. END_OF_DOCUMENT_TOKEN_TO_BE_REPLACED 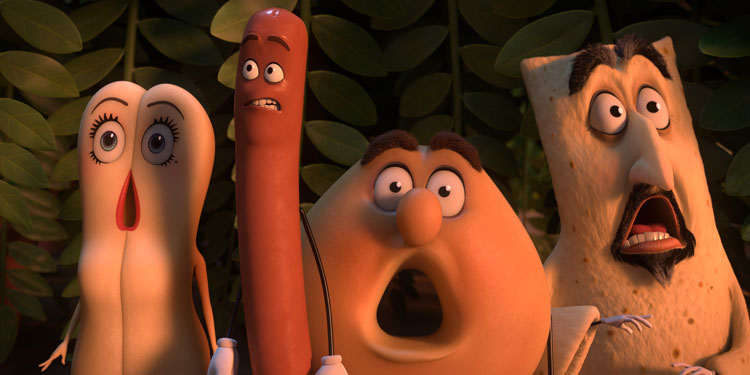 Yesterday at SXSW Seth Rogen presented a work-in-progress screening on his R-rated, CG animated movie Sausage Party. It got pretty good buzz, even if it wasn’t finished, with many suggesting it’s a smart and funny movie, which takes a sideways look at belief and religion.

Now the first trailer has dropped, which you can watch below.

Here’s the synopsis: ‘Sausage Party, the first R-rated CG animated movie, is about one sausage leading a group of supermarket products on a quest to discover the truth about their existence and what really happens when they become chosen to leave the grocery store. The film features the vocal talents of a who’s who of today’s comedy stars – Seth Rogen, Kristen Wiig, Jonah Hill, Bill Hader, Michael Cera, James Franco, Danny McBride, Craig Robinson, Paul Rudd, Nick Kroll, David Krumholtz, Edward Norton, and Salma Hayek.’

It’ll be cinemas in August. END_OF_DOCUMENT_TOKEN_TO_BE_REPLACED 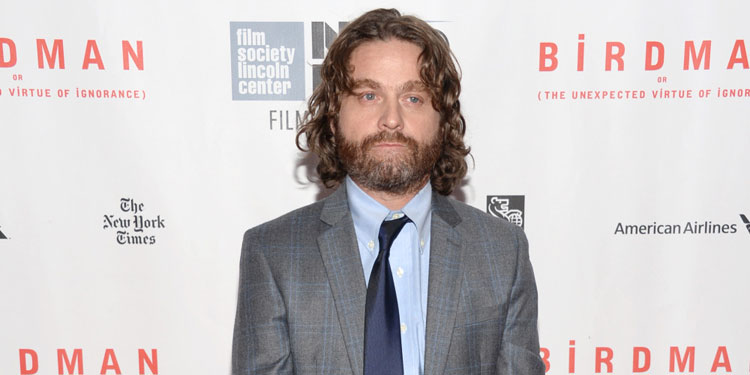 I’m pretty much convinced that if Zac Efron sees a script he likes, he tells his agent that he’ll make it, but only if they put in more opportunities to take his shirt off and show off his physique. But it seem that with Neighbours 2 (known as Neighbors 2: Sorority Rising in the us), Seth Rogen also wanted to ensure he could get his shirt off to, as you’ll see in the film’s first trailer.

Here’s the brief synopsis: ‘Returning stars Seth Rogen, Zac Efron and Rose Byrne are joined by Chloë Grace Moretz for BAD NEIGHBOURS 2, the follow-up to 2014’s most popular original comedy. Nicholas Stoller again directs in a film that follows what happens when the will of parenthood goes against the bonds of sisterhood.’

The movie will be in UK cinemas May 6th. You can take a look at the trailer below. END_OF_DOCUMENT_TOKEN_TO_BE_REPLACED 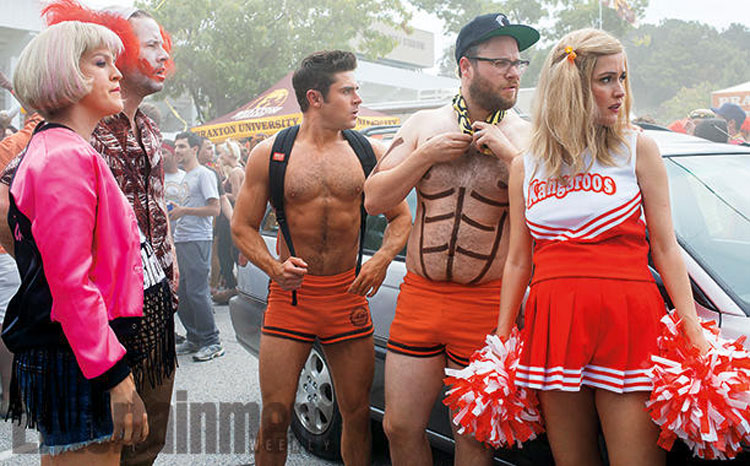 There have been quite a lot of set pictures of Zac Efron with his top off on the set of Neghbors 2 (which will be Bad Neighbours 2 in the UK). However, it’s only now that the first official pic has arrived, which shows that it’s not just Efron who’ll be taking off his shirt, as Seth Rogen is showing off his chest hair too.

And not to be outdone on the abs front, Rogen has gotten out the magic marker to draw some on.

Not a vast amount is known about the plot of the movie, although the fact it’s likely to have the subtitle ‘Sorority Rising’ suggests that after Efron and co’s frat boys hijinks in the first movie, this time around the ladies will be getting in on the action.The likes of Chloe Moretz and Selena Gomez have been signed up to cause some of that trouble.

It’ll be in cinemas next May. 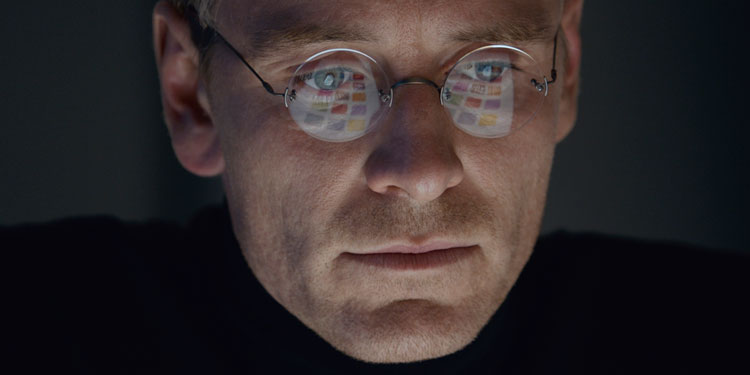 Comparable with the iPhone it seems that were are getting a new biopic of Apple’s late founder every few years, which is slightly bigger (and hopefully better) than what came before it. Ultimately though, it’s composed of tried and tested components making the finished piece unoriginal yet appealing to a demographic who takes comfort in being part of a brand and consuming what they have already experienced in a slightly different package.

In 2013 it was Ashton Kutcher playing Steve Jobs, this year it’s Michael Fassbender, and in 2017 I predict Daniel Day-Lewis taking the mantle in a 3 part epic directed by Gus Van Sant (not really).

But however the man is portrayed on screen there is no denying that Steve Jobs was incredibly influential and has left a lasting legacy on this planet through Apple’s consumer products, investment in companies such as Pixar and donating computers to schools around the world. END_OF_DOCUMENT_TOKEN_TO_BE_REPLACED